The History of Healing Springs in Ashe County, NC

William Barker discovered the Healing Spring in 1883. Captain H.V. Thompson acquired the property soon after, and in 1887 he built a hotel and cabins on the property and named it Thompson's Bromine and Arsenic Springs. Most of the original cabins remain at this once popular health resort.

The Discovery of Healing Spring 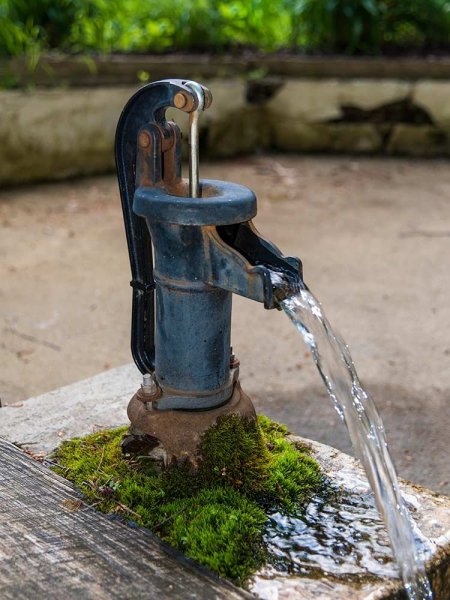 The Healing Spring was discovered in July 1883, by Willie Barker, son of Mr. and Mrs. Eli Barker, according to well-accepted tradition. The story goes that Willie was helping his father plow corn on a hillside and his father sent him to the branch to find a spring from which to bring him some water to drink. Willie is quoted as relating the following story to Ed M. Anderson in the Charlotte Observer of July 23, 1939:

"I went across the road and got in the branch and walked down it, stooped along under the bushes and grape vines until I felt cold water under my feet. I then commenced looking for and soon found the cold water running down the rock. I scratched around until I found a place large enough to get the cup of water for father. He sent me back for more water and said it was the best he had ever drunk. My hand and arm were very badly sore. (Poison oak) The next morning it was almost well. We went back the next day and father worked in the spring with his hands that had sores on them, too. (also poison oak) The following day they were nearly well. Then everybody got to use the water and it had cured a power of folks, sometimes 300 come here in one day."

Little Willie's story was verified by his father and the fame of the spring spread. Willie's father was also loud in his praise. Shortly after the discovery, he issued a written statement quoted here in part:

"...What first attracted my attention to it was the remarkable rapidity with which it healed my hands and my son's hands which were full of sores. Others then tried it on different affections with the same effects. Thinking there was much good in the water, I commenced drinking it freely.

"I was in bad health, very weak and low in flesh—suffering with my breast and stomach. In one month, I was well, hearty and strong. I had twin daughters, grown—both of them had consumption; one of them died a short time before the discovery of the springs; the other one we put to using the water, and now she is well and strong, and looks as well as ever; her cheeks are rosy."

Based upon the experiences reported by the Barker family and others, many were encouraged to try the waters for all manner of afflictions of human and livestock. When word of the curative powers being attributed to the spring waters reached the ears of Captain C.V. Thompson in Saltville, Virginia he came to Crumpler and camped near the spring.

Defense of The Spring

Two groups of users were developing. Mountain men came with moonshine and rowdy ways to spend time carousing with their friends. More gentle local folk held religious gatherings on the banks of the branch. Prayers were often interrupted and matters usually degenerated into brawls between the factions. The invalid Captain Thompson finally took matters into his own hands and bought the property so that he could use the spring in peace. He enclosed the spring and allowed entry only by permission.

Protests arose from both factions who maintained that the spring should belong to all of the people and vowed to continue their use at their pleasure as a matter of right. A crowd of bully boys descended on the spring. Captain Thompson calmly picked up his rifle, limped to the entrance and took up his guard position. As the crowd moved near him, he announced his intention to shoot any man who tried to force his way in. The mob finally departed. The spring has remained a private property from that day forward.

Captain Thompson changed the name of the spring from Healing Springs to Thompson Springs and set about creating a health spa. He built a hotel in 1888 which contained a restaurant and community rooms on the first level and nine large guest rooms on the second level. An octagonal gazebo was built over the spring in 1889 and the water began to be bottled for sale. A road was built from the spring to Marion, Virginia to afford access to the nearest railway. 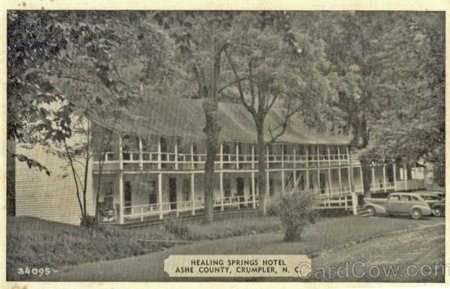 Between 1889 and 1899 an average of fifty wagon-loads per day were shipped in crates of six half gallon bottles costing $6.00 per case. A national advertising campaign signed up 60 agents who complained constantly that not enough Thompson Bromine-Arsenic Water was provided them.

The spa was such a success that eight separate cabins were constructed to handle the overflow of guests. The North Carolina Geological and Economic Survey, in their Economic Paper Number 15, reported in 1907 that the resort capacity was 75 guest. No other springs were reported in Ashe County at that time. The spring water has not been sold since 1946. Today it is offered free to anyone who would like to partake of the natural mineral water.

The body of folklore that has grown around these waters is interesting and absorbing. According to folk who have lived nearby for many years, one must drink about ten regular glasses of the water each day to maintain the "innards" and for external complains, lave the water on the affected parts freely and let it dry in the air. Repeat as often as convenient. Local tradition has held steadfast for over 100 years that the waters have curative powers.

The below was taken from an advertisement published in 1887 for what was then Thompson's Bromine-Arsenic Springs:

Thompson's Bromine-Arsenic Springs Water is offered to the public as a gift of nature for the alleviation and cure of many of the ills to which the human family is subject. Wherever it is known, it has the unqualified approval of physicians in the treatment of impurities in the blood.

Bromine and Arsenic commented it to the most favorable consideration of sufferers from Eczema, Scrofula, Cancerous Affections, Primary and Secondary Syphilis, Ulcers, Tumors, Boils, Erysipelas, and Diseases of the Lungs, Kidneys, Womb and Bladder, and builds and repairs these organs and wasted tissues of the system. Through its action in purifying the blood, it imparts health to the skin and gives clearness to the complexion.

Its analysis by Dr. H. Froehling (whose reputation as a chemist is second to no one in this country) is a sure guarantee of its correctness, and any educated physician will testify to the value of the ingredients which are so happily blended in this water. It is the only combination of the kind ever discovered in this or any other country and is destined to become the most extensively used natural mineral water in the world.

It is put up in cases of one dozen half-gallon bottles each and sold at $6.00.

It is estimated that many thousands of dollars are spent daily for (so-called) mineral waters, which contain but faint traces of curative component parts, many possessing not even a trace of healing virtue. Such folly will no longer be excusable, since the discovery of this appropriately styled, "Pool of Siloam." For it is a well-established fact that in drinking this water, each glass assists in rapidly purifying the blood, yea the whole human system. When a house is on fire no one hesitates to put it out if possible. Now, if your system needs a panacea, why procrastinate?

Order a case of the water and note the inevitable results. We have hundreds of testimonials from prominent persons in many States, but lack room to publish them. I have been interviewed by numbers of the most prominent physicians of our largest cities, who are amazed at the happy results of this water in such a large variety of Blood, Lung, Liver, Kidney, and Stomach Troubles.

Standing The Test of Time

During the time that Thompson and his wife Pamela J., who had organized Thompson's Bromine and Arsenic Springs Company successfully operated the hotel they had built, the Hotel accommodated 75 guests, and was open from May 1st to November 1st. The price of board was $2 per day; $12 per week, and for four or more weeks, $10 per week.

On August 25, 1962, disaster struck. The hotel was destroyed by a fire so intense that the 50 x 150 two-story structure was reduced to ash in only sixty minutes. Today, only the original concrete steps remain. The cabins were left undamaged and the spring untouched.

Entered on the National Register of Historic Places on October 22, 1976, the cabins, spring house, and grounds are maintained in exterior appearance as originally built. However, the interiors have all been updated with modern conveniences.

More information about the historic spring and additional testimonials about the springs are available in the New River Notes.

We are committed to making our website ADA compliant.